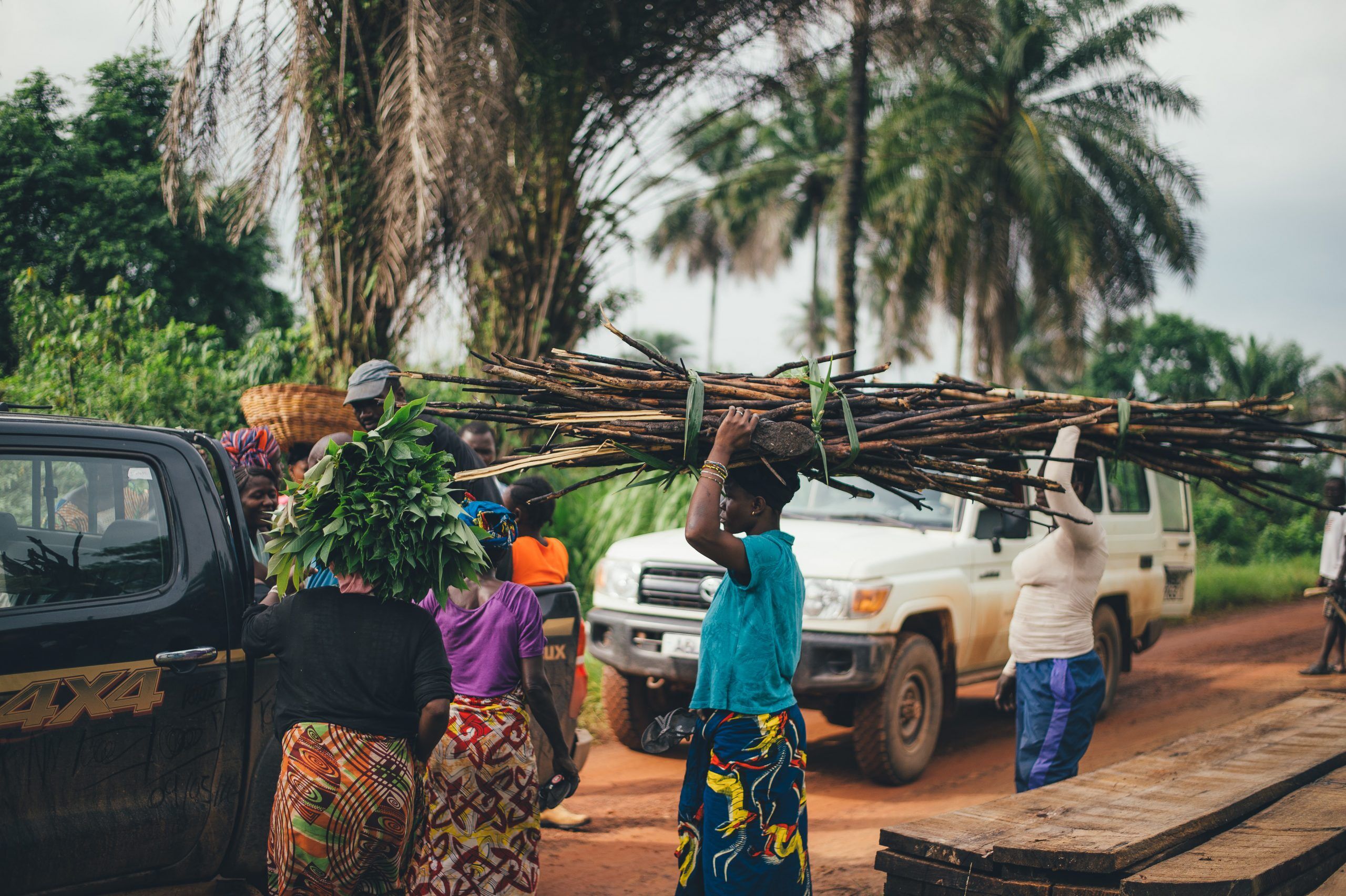 Can big pharma such as GSK and Novartis make their medicines available for everyone?

Imagine that you are selling your used mobile phone and there are 2 people interested in buying it from you. One is offering you $300 and the other one $100. You wouldn’t have to think twice about who you’d sell it to, right?
That is in fact how businesses select their target markets. Because in the end, they mainly focus on how profitable a market is. That means that people living in low- and middle-income countries, which account for more than 75% of the global population, have limited access to medicine. Access to medicine however goes further than just providing affordable medication. For example, it’s also about there being enough R&D projects that focus on diseases present in those countries.

Not only from a human point of view it’s important that pharma companies do their best to provide people in low- and middle-income countries with good medication. I also believe that the rapidly growing population of these markets could in the end be seriously interesting to them.
There is an organization called Access to Medicine Foundation. Their mission is to stimulate and guide pharmaceutical companies to do more for the people who live in low- and middle-income countries. Every other year, they set up a list where you can see how the world’s largest pharmaceutical companies score on this matter.

The WHO states that all people in the world should have the right to the highest attainable standard of health, yet for an estimated, two billion people access to medicine is out of reach. Furthermore, about 100 million people are pushed into extreme poverty because they have to pay for healthcare they can’t afford.

The foundation was founded in 2003 by Wim Leereveld with the aim of encouraging the pharmaceutical industry to do more for the two billion people who still lack access to medicine. With a large team of researchers, they focus on the 20 largest pharmaceutical companies by ranking them in an index based on their behavior in this regard.

They use a three-part model for their index, first, building consensus among the pharmaceutical companies, then, stimulating them to compete in the access to medicine race, and finally by sharing who did that the best. Since research has proven that rewarding is more effective than punishing, I think it’s the right way to improve global health. The Foundation is completely independent and is funded by several organizations like the Bill & Melinda Gates Foundation.

How do they measure it?

All companies are different so it’s not easy to tell who is doing the most. But, what I like about the index, that is it’s not just a list of companies that have donated some money to a third-world charity but it’s a very well-founded score based on 14 priority topics.

To keep it simple, there are three main areas of how they judge the pharma companies:

1st Company strategy
20% of the score is based on how their medicine-access to low- and middle-income countries are integrated into their business strategy. So, is it equally part of the companies’ strategy to their other main goals that are more profitable? And, do they provide incentives for all layers of employees to focus on medicine-access goals? You can think of a bonus structure based on the number of patients that they have reached instead of the amount of revenue they’ve earned.

The 2nd area is Research & Development
This topic accounts for 25%. Here, the foundation looks at the R&D activities of the companies involved. It’s important that the R&D activities are also focused on diseases in less developed countries. But it doesn’t stop there. It also checks whether companies have the intention to actually produce and supply those urgently needed medicines in these countries. In order to stimulate a sustainable local pharma industry, companies also get rewarded for contributing to local R&D teams.

And, last but with 55%, also the most important one: Product Delivery
It covers a wide spectrum of topics, ranging from medicine registration to intellectual property sharing and the logistics behind the supply of medicine. The company has to do its best to overcome any local barriers in providing these hard-to-reach markets. It’s not only about the physical availability of the medicines but also about the pricing so it’s affordable for the local population.

Who is the winner?

So, coming back to the results of the new index, GSK currently holds the no. 1 position, yet they are only slightly ahead of Novartis. According to the foundation, they have both provided evidence that more patients were reached through access strategies such as fair pricing and allowing others to also manufacture and supply medicine they have patented.

You can find the entire top 20 below 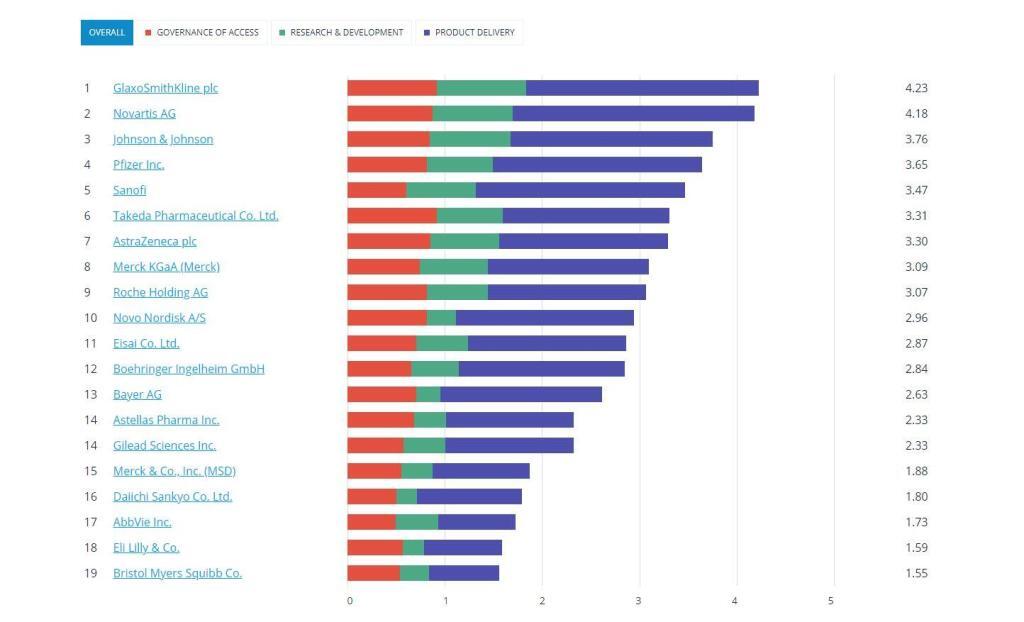 But being in the top ten isn’t everything. The foundation encourages companies to do better every year, so it is also about who progresses the most in the ranking.

In 2021, the Index finds that pharmaceutical companies are just inching forward when it comes to their business decisions on improving access to medicine. There are lots of initiatives to improve medicine access, yet these actions remain focused on a few products and just a few countries, but that’s not enough. As I mentioned earlier, we’re talking about more than 75% of the global population that is unable to just walk into a pharmacy and get their medicine.

Most companies are willing to do more but if it doesn’t bring them a lot of revenue, they must get some form of recognition. And that’s what the Access to Medicine Foundation is doing. But, I think these companies shouldn’t underestimate the positive impact it brings to their employees. It gives a lot of motivation and inspiration to reach goals that are more than based on just revenue. Think about it yourself: Would you choose to work for a company that focuses on improving medicine access, even if it would mean you’d get paid less?

So hopefully we will see some improvements in the future. Do you want to know more? You can find the entire report here. This is why India is the medicine factory of the world