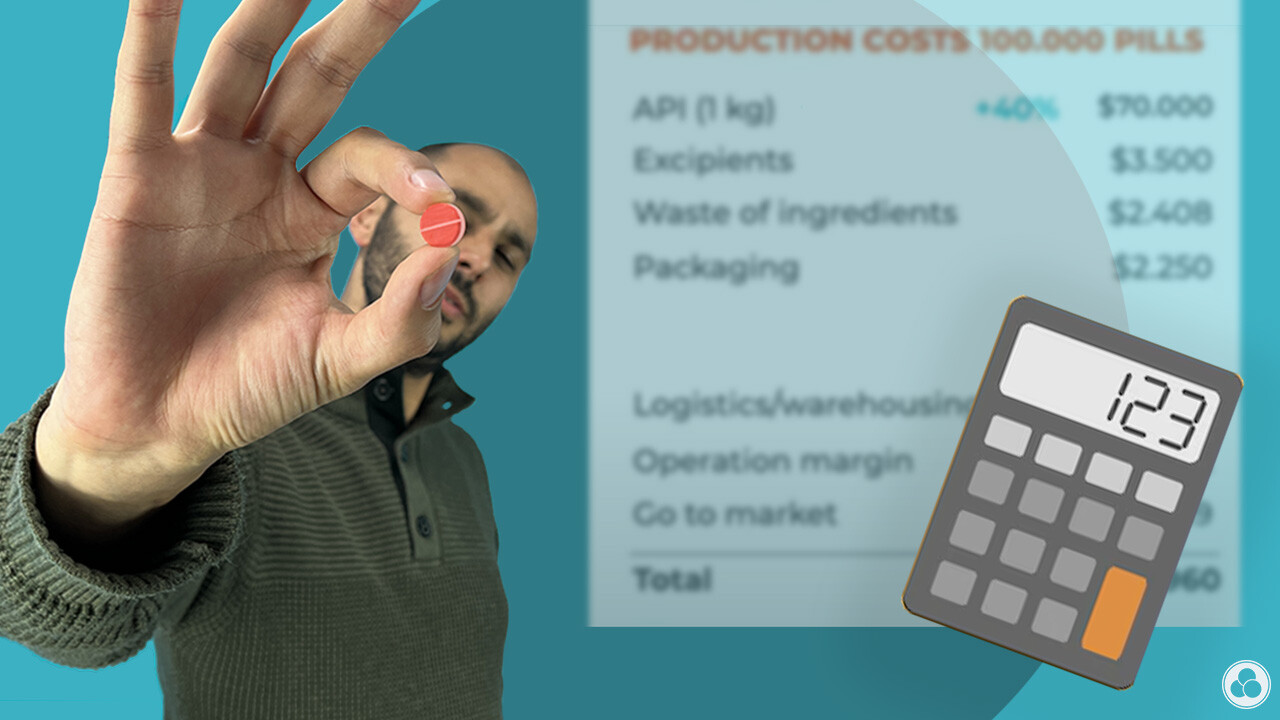 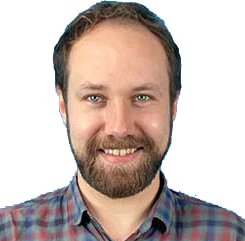 Life is getting more expensive, just look at the gas prices worldwide, inflation, and shortages of starting materials. The pharma industry is no exception, as the entire supply chain is affected. It’s just a matter of time before we will notice price increases.

If we take a pill that now costs $1. What would happen if the price of the API inside this pill would increase by 40%? Does the entire pill become 40% more expensive?

The answer is no. But to better understand why not, we need to know what the price of medicines consists of.

For the development of a new medicine, pharma companies need money for R&D, but for this article, we decided to zoom in on the costs of generic medicines, so medicines of which the patent has expired.

,Back to basics
First, back to basics. What was an API again? The API is the ingredient in medicine that is the active part, the one that does the healing. Other than containing an API, a drug consists of excipients, and it costs resources to produce it, to store it, to ship it and to make some profit out of it.

Breaking down the cost price of drugs isn’t easy. Medicine producers usually aren’t thrilled to share exactly what they paid for an API, the other ingredients and production costs. So we will set up an example case and then break down all the relevant costs.

In a publication from 2018, by scientists from the University of London, Liverpool and Harvard, research was done on the production costs and potential prices for insulin related medicine.

By contacting API manufacturers, they were able to get an insight into what the price of their specific API was, and they also researched other costs such as the formulation, manufacturing process, the excipients and other elements that have an impact on the price.

But to better understand what costs what, we will set up an example medicine production line together:

The cost of API
The prices of an API can fluctuate a lot per producer. You’d think that the better qualified the producer, the more expensive the API. But on our platform we’ve seen prices for the same API be quite far apart for the same qualifications. The price difference can be thousands of dollars per kg. Also for example when there is a distributor or an agent in between.
But in general, the price of the API depends on the batch size, the country where it was produced, the quality system the producer has, what their profit margins are, and also if the buyer of the API perhaps is a well known customer to them who frequently also buys other APIs from them resulting in a discount.

The cost of excipients
Then we have the excipients. Excipients are the ingredients that are there to support the API, for example as bulking agent, as flavoring, or to act as a stabilizer and thus the shelf life of the drug. It depends on the medicine which excipients you need and how many, but in our example it is $3.500 for the 100.000 pills.

Loss of ingredients during formulation
Unfortunately, during formulation you will waste some of the ingredients. For instance samples that you need to take for quality regulations, or because some material sticks to the packaging. Same as with you at home, you can probably never finish a ketchup bottle cleanly, there will always be some left in the bottle.

And there can be spills, or errors, leading to an average norm of 4.5% waste of the API and excipients during formulation. So we’ll add that to our production costs so far.

Cost of materials and formulation

Then, you need something to put all of this in. Containers to put tablets in, empty capsules to fill with powder, vials to put liquids in; so basically a packaging method of choice that is most convenient for the end user.
In our example, we’re talking about $2.250 for primary packaging for our 100.000 pills. 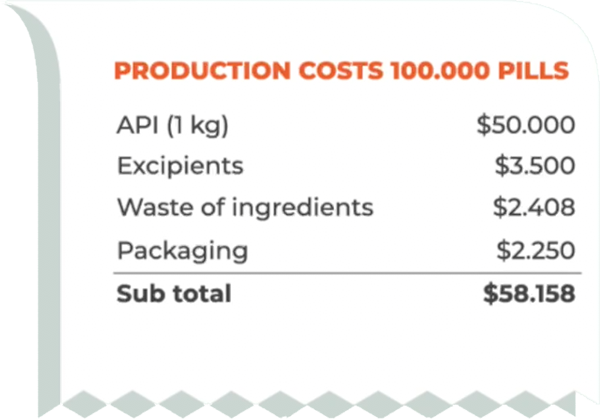 Logistics/warehousing
When the pills are finished, they don’t get shipped to the customer or end users the same day. You need to store them in a warehouse, sometimes for months. And not all can be kept in a plain warehouse, perhaps they need to be stored cold. And there are lots of checks, by the quality control department and the warehouse people, before you’re able to ship out the drugs.

And then, when you are finally able to send them out, there are costs for the secondary packaging such as boxes, pallets, filling material, document costs, labor costs…. On average, it adds 20% to the price we’re on so far.

Our price breakdown is now complete, let’s round up all these numbers and put them in a pie chart: 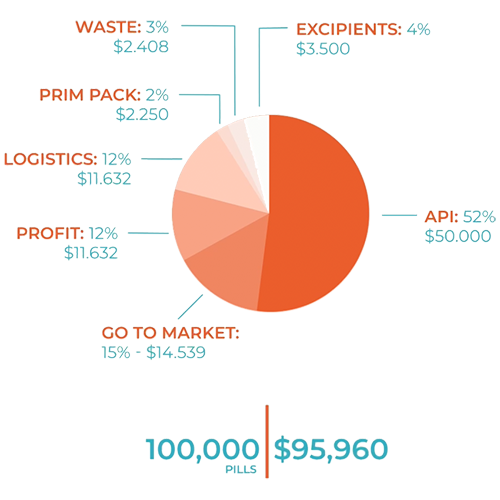 But on the other hand, if you find a 40% cheaper source for the API, for example by contacting different suppliers, it also means that the cost price of the medicine becomes 20% less. Which would save you about $20.000 bucks. It’s up to you if you want to lower the selling price. Or go to Disneyland with the whole company.

There are still lots of other parameters that have an effect on the price of course. Such as the scale of your production, producing 500 pills by hand or 10 million by machine, there’s a difference in the cost of production. And buying 500 empty capsules or 10 million, you can guess where you’d get a better deal per capsule.

But this was to give you a general idea about the impact of the price of the API on the cost price of the entire drug!

Thank you for reading.